Amid the bustle of Singapore’s Epicurean Market, Cathy Wagstaff chats with David Myers, the unstoppable chef behind Sona, Comme Ça, Hinoki and the Bird.

Cathy Wagstaff: So what inspired you, what started you on your career path?

David Myers: Well I was studying international business and instead of doing what I should have been doing which was studying for exams and figuring out what type of business I really wanted to do I was cooking for all of my friends and reading cookbooks and really inspired by the idea of travel and types of foods around the world and I wanted to cook them. So I was doing that instead of studying and so that kind of led me into thinking ‘maybe I need to rethink this career of mine’ and I dropped out of school, focused entirely on getting a job at the best restaurants and from there was kind of history. I went to Chicago, worked for the famed Charlie Trotter at the time, had an amazing experience which just set me on this path that was very clear for me that I wanted to be a chef.

CW: And has it brought everything that you wanted?

CW: And so is Singapore your first one outside of the States?

DM: No, Tokyo is. But Singapore is the first stop that I ever had in Asia back in 2001. It was the first time that I had travelled outside of the US to Asia and I fell in love with the culture, the food, the South-East Asia feel. I had just never had that before and it was eye-opening.

CW: When you were doing all that studying, or non-studying at school, which were the chefs then that really influenced you to want to be a chef? Was there a certain type of food?

DM: I think it was Charlie Trotter. I happened to find his very first cookbook, self-titled, and in the book there is a chef that is quoting Goethe and Dostoyevsky and Nietzsche, and talking about how food and excellence in life comes together and was he was utilising all these crazy ingredients I’d never seen and there was never a cookbook done like that at the time. Like, each page was a recipe so over here was the written ingredients and over here was a picture of it in this perfect, vivid form, and he spent a fortune on it. So that changed me, shaped me, inspired me, and I moved to Chicago to work for him, knocked on the back door and wasn’t going to leave until I got a job. Literally I went there dying and I sent my résumé and I never heard back from him. So I just said forget this, I flew off knocked on it and I got the job. And so it was never-ending after that. It kind of set me on my path.

CW: I haven’t actually heard of him, excuse my ignorance.

DM: It’s OK. He’s considered – he was considered – one of the best chefs in the world at the time. He, Frédy Girardet, Joël Robuchon, Daniel Boulud, they were certainly some of the top – certainly in America, he [Trotter] was arguably the best chef in America. And he has since passed, unfortunately very young but he was a huge influence on my culinary life.

CW: And is he going to be a bit of an inspiration behind your cookbook when you do one?

DM: Well, I certainly would have a lot to live up to that’s for sure from his first cookbook. My cookbook, and we’re working on one now that is really based on, again, my travels and everything that I do where travel has inspired and influenced not only the cooking that I do but also the restaurants that I create.

CW: What are your favourite restaurants?

DM: Well I have a lot around the world, it depends on what type of food I want to eat, but I love, for example I love Tokyo, I am a huge sushi fanatical, I love sushi, so my best sushi restaurants, well the best are in Tokyo period. And there’s about a handful that are truly the spectacular, really special ones that really just blow me away and are something that I could eat almost every day even though it’s so expensive and rare and you can’t do it every day but it’s something that I love that much. So that’s one.  I also love the hawker stands and the hawker dining of Singapore, I really enjoy that style of eating. I love exploring new cuisines, like in Bangkok for example new styles of food that I’ve never had before or in Vietnam, new styles that I’ve never had before, they’ve got a street-food scene there as well.

DM: Yeah I love street food. Hong Kong I love because it’s, you know, Cantonese cooking is a whole different style for me and I don’t know much about Cantonese, or Chinese in general, outside of pork steamed dim sum and things like that, so that’s also very interesting for me.

CW: And what about in the States, your favourite restaurant there?

DM: In the States I love what we do in California, very simple, a lot of grilled items, we have impeccable ingredients that we are blessed with because of our growing conditions year round, so to me the simple, healthy, vibrant food of LA in particular or the single-origin focus of San Francisco and I think that that is just the best food on a daily basis for me.

CW: Are you still currently still involved in your first restaurant?

DM: No, so that restaurant we closed after seven years to relocate to another restaurant, to move where we are moving it. And when that came up we changed the concept I didn’t want to do, it’s a different landscape. So my first restaurant was very high-end and when we came down to reopen in 2012 fine dining wasn’t really alive any more in LA. It’s just that the ambiance was not so much there so I created a new concept built around what I was interested in and that’s what I did, so Hinoki & the Bird was my last one. That’s the last one that I created in the US and then I’ve fully left to focus on international, so putting all my time on Tokyo, Singapore, looking at other opportunities in Asia, because it’s a once-in-a-lifetime opportunity to pull that energy to do it, and it takes all that energy.

CW: So currently you don’t have any restaurants in the States?

DM: Yeah, I just left my old group that I created to focus entirely on this.

CW: Good on you, that’s exciting.

CW: ‘Good on you’ yeah, that is. I’ll have to try to fit ‘giddy up’ into this conversation somehow. How often would you eat out at other restaurants?

DM: When I’m travelling, every night; when I’m at home, once a week.

CW: And, you’ve already told me that sushi is your favourite food.

DM: I love sushi, I love Japanese food in general, but you know it’s hard to say because any given night could be different, if I’m in Singapore I’m not going out for Japanese food, even if they had the best sushi here I’m not going to do it because in Singapore I want hawker food, I want, you know, chicken rice, I want to explore chilli crab and black pepper crab, I like to enjoy the food of the locals. Because how often are you here and you get to do that, you know?

CW: Exactly. What do you love to cook at home?

DM: At home I keep it really simple, I love to grill a lot of steak, make a salad have a glass of wine, as simple as possible.

DM: It’s perfect right? How can you beat that?

CW: It sounds like a good old Aussie meal too.

DM: I know, I know. I think I’d fit in really well there. I’ve always loved my grill, or barbie as you would say there, I love it.

CW: And so are there any plans for anything in Australia?

CW: Well they would embrace you there; they always love a good-looking chef.

CW: That would stand you in good stead for a start.

DM: Great, great absolutely perfect example, and I love his food. I love his cooking.

DM: Sydney’s a very dynamic restaurant town in my opinion, not to mention stunningly beautiful. 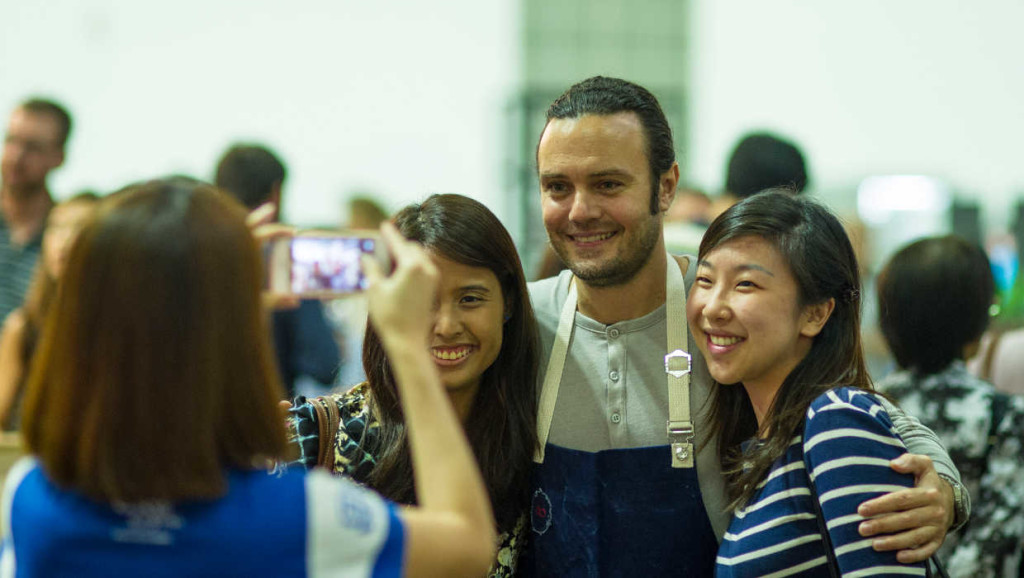 CW: And what about your MBS [Marina Bay Sands] restaurant, what’s that going to be called?

DM: Still working on it.

CW: Still working on that one. How will it differ from other restaurants that you’ve…

DM: It’s totally different than any restaurant I’ve ever opened, it’s really geared around small-plate sharing, it’s got a significant California feel with the unique Singapore spices and we haven’t really done that yet. And the cocktails that I’m going to craft are really going to be geared towards this market. Which is very much an international market but still we have so many unique foods that we don’t have in America or Europe, and we’re going to be bringing that into play here.

CW:  And so will it be like a tapas menu.

DM: No it’s not Spanish by means, but think communal small plates, or it could be sharing some of the food right so those are the dishes that would be indicative of the type cooking that we’re doing here. Lot of a heavy charcoal component to grilling some items, serving, it’s meant to be a fun you know, very casual environment with sophisticated food.

DM: The décor is absolutely stunning, it’s a mix of old and new, it’s got kind of an old feel, we’re trying to bring in a sort of old Singapore feel bring out a bit of a British Empire mixed with the old Singaporean, Malay, Chinese feel, yeah vintage dim sum parlour bringing in cool little soups and fun little appetisers, but there’s  floor and there’s wood, the materiality is stunning, there’s concrete,  there’s glass, there’s metals, the lighting is pretty spectacular across the board, obviously you need good lighting of a good environment, you get that soft glow… There’s three different looks throughout, the front dining room, the main dining room and you’ve got another private dining room.

DM: I will not relocate, I’ll be based in LA, so that’s my home base and I will be here as often as possible to look after my crew. I’m putting in a team that I’ve worked with for 10-plus years to help support the restaurant.

CW: From your other restaurants?

DM: Yeah, they have worked with me before, and had since moved on to take on leadership roles of their own in other restaurants, they were already my chefs they were leaders and I brought them back for these roles because they wanted to do international. So it was a great opportunity for them.

CW: Well that’s probably about everything but we’d love to have you in Australia.

DM: Well thank you, thanks for that support, great questions.

CW: Thank you, and I’d just like to get a photo with you so I can actually show them in Australia the new up-and-coming chef that’s going to grace our shores soon. 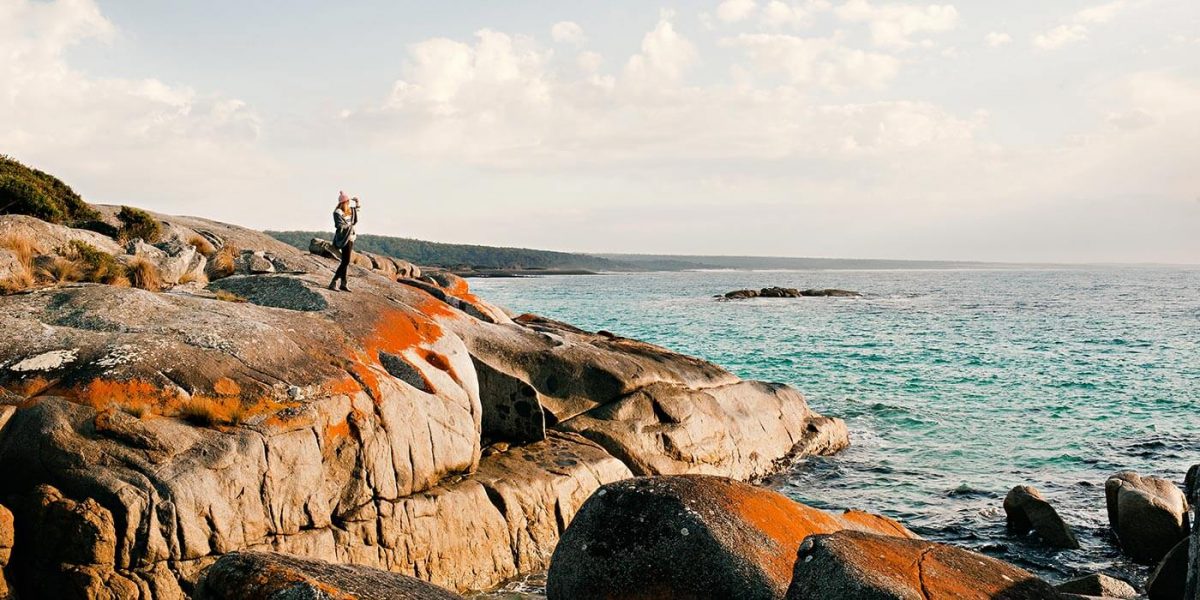 Book a Tasmanian small group trip with Inspiring Journeys to...

WIN $500 worth of top-shelf wine to toast the festive season...

Inspired dining with incredible views – welcome to Chi by Lotus

FOPE's latest collection of exquisitely crafted Italian jewellery will be here in December.

Inspired dining with incredible views – welcome to Chi by Lotus

Chi by Lotus brings sophisticated casual dining with an eclectic twist to Barangaroo.

Viking Cruises offers a unique way to explore the world onboard state-of-the-art river, ocean and expedition ships, with newly released